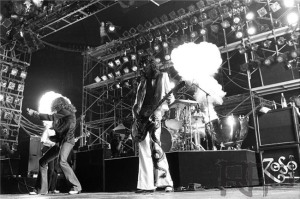 Judging from recordings of their live shows, Led Zeppelin were hit-or-miss on stage. This was particularly true in the mid to late ’70s after fame and hard living were beginning to take their toll on the group, particularly Jimmy Page and John Bonham. The band toured North America in 1977 shortly after the release of their penultimate studio album, Presence, and the dark and mysterious vibe of that record carried over into the live shows  They ran quite long with a brief acoustic set placed in between the electric portions. The Ft. Worth concert offered here is from one of the best nights of the tour. John Bonham is really playing extraordinarily and pushing the rest of the band to similar heights. Highlights include the opening trifecta of ‘The Song Remains The Same’, Sick Again’ and ‘Nobody’s Fault But Mine’, a sublime version of ‘Since I’ve Been Loving You’, a lengthy ‘No Quarter’ (with a rowdy, John Paul Jones-led romp through Tchaikovsky’s Nutcracker), the excellent acoustic set and a great cover of Jerry Lee Lewis’ ‘It’ll Be Me’ featuring Mick Ralphs from Bad Company on guitar.