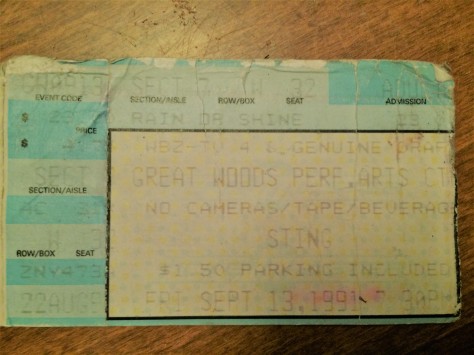 Here’s a nice capture of a Sting concert recorded by BBC Radio 1-FM during his 1991 tour promoting The Soul Cages, a broody, jazz tinged tribute to his then recently deceased father. This marked the end of perhaps Sting’s most jazz influenced phase. He would soon focus more on straight ahead pop bringing him far more commercial success as a solo artist.

It was also during this tour that my father and I caught an excellent show in Mansfield, MA (see ticket above – a whopping $23 for seats under the pavilion!). Even as a 13-year-old, it was easy to be impressed by Sting’s ace band which featured Frank Zappa veteran Vinnie Colaiuta on drums, Dominic Miller on guitar and one time E Street band keyboard player David Sancious. David Sancious was an absolute monster that night, oozing jazz filled piano runs (check out his solo on ‘When The World Is Running Down‘ here) and MIDI horn riffs controlled by a mouth piece attached to his keyboards. He made quite an impression on me and I can still see him leaning into his keyboard rack, pounding out one amazing line after another.

The set list featured here was the exact same one we saw and I remember being amused with his choice of Bill Withers’ ‘Ain’t No Sunshine‘ and Hendrix’s ‘Purple Haze.’ His solo tracks were rendered beautifully. ‘All This Time‘ (a criminally underrated song), ‘Why Should I Cry For You‘ (with a lovely segue into ‘If I Were A Carpenter‘) and ‘Fortress Around Your Heart‘ were all standouts that night, as they are on this recording.

But it was the songs from The Police repertoire that had the crowd on its feet. One of my most vivid memories of the night (and of any concert) was the crowd swaying and singing along to the chorus of ‘Walking On The Moon‘ under the late summer sky, overpowering Sting’s vocals. Blissful!

This performance is a lot of fun to revisit. I hope you find will enjoy it as well.